Psoriasis In America 2017: The Rocky Road of Chronic Inflammation

While each person's journey is different, and their psoriasis symptoms and treatment experiences may not be the same, there are frequently well-worn paths that are taken and common barriers that are encountered by people living with psoriasis.

Health Union, LLC conducted a large survey of people who have Plaque Psoriasis during the first half of 2017 and asked many questions about what it’s like living with a chronic condition that affects people so uniquely. Over 1,000 people completed the survey. Here are the highlights from what our community shared with us.

For many people with psoriasis, their journey may start with a “triggering event.” More than ½ of survey participants identified a specific incident that coincided with the beginning of their psoriasis symptoms. These precipitating events tended to include physical or emotional forms of stress. 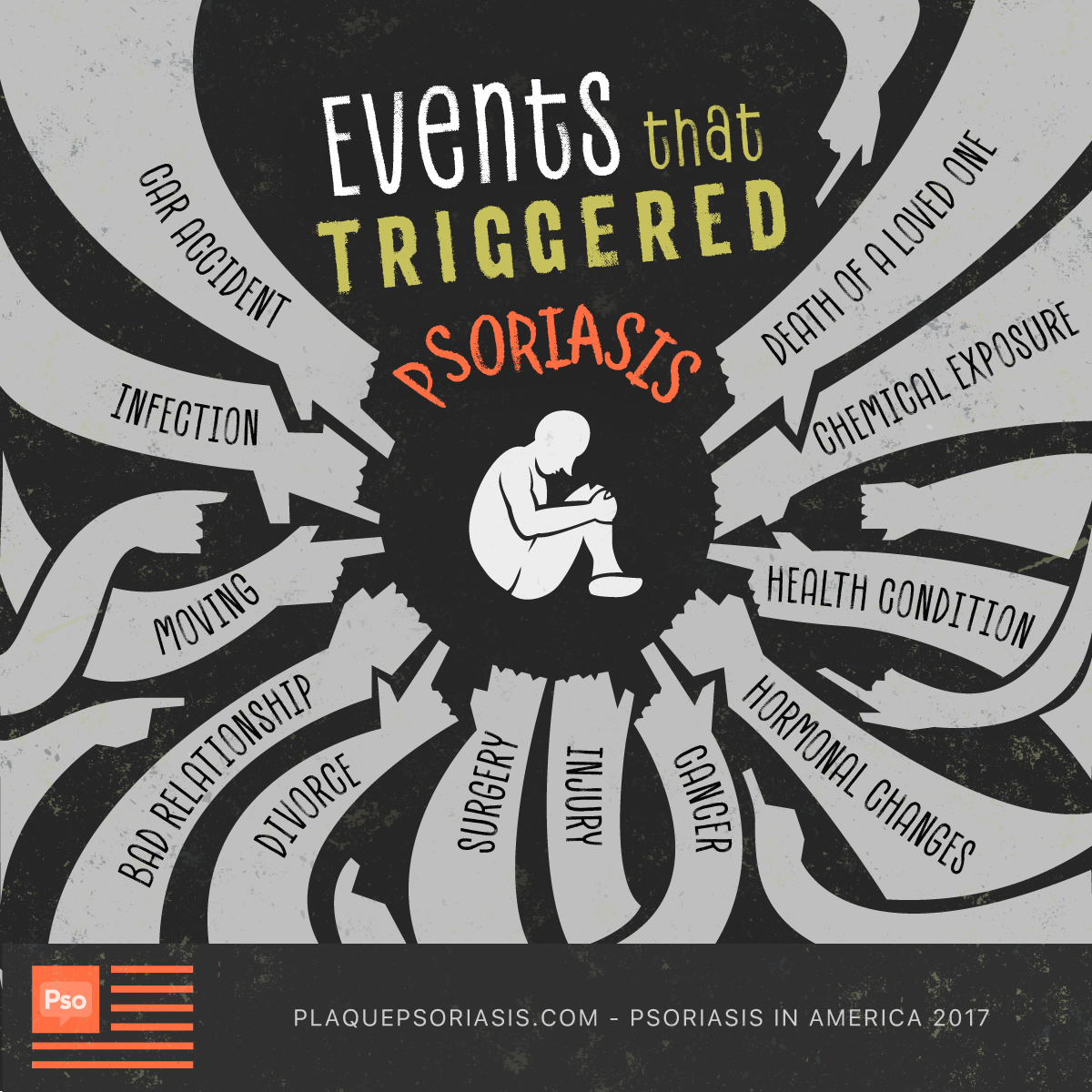 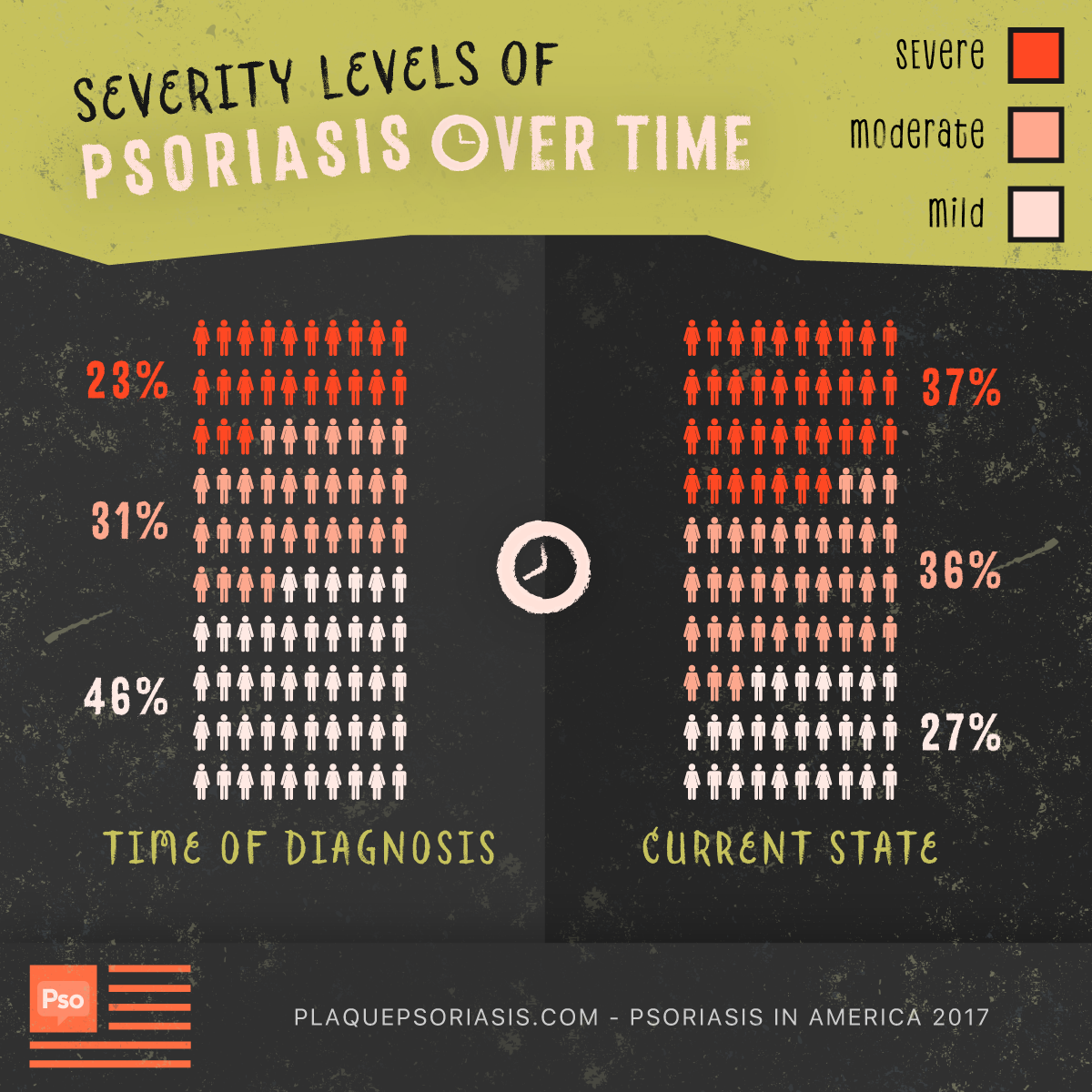 We also see that there is a change of the symptoms that people experience when they are first diagnosed compared to the symptoms they are currently experiencing. More people are likely to experience symptoms that are associated with autoimmune disease (fatigue and pain) when initially diagnosed. With the progression of inflammation, symptoms may change from those that are primarily characterized by skin involvement to including symptoms associated with psoriatic arthritis (thickened, pitted or ridged nails and swollen and/or stiff joints). 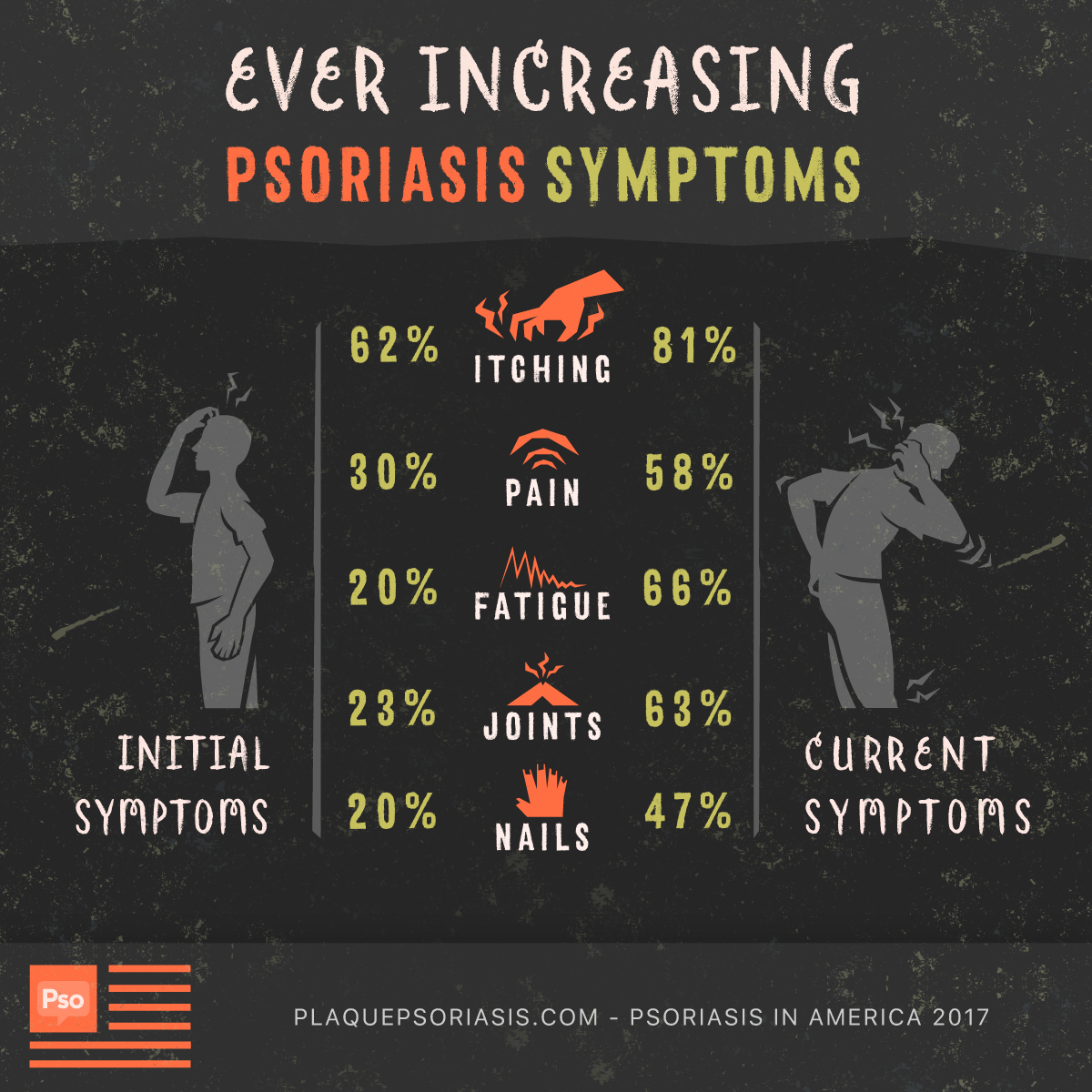 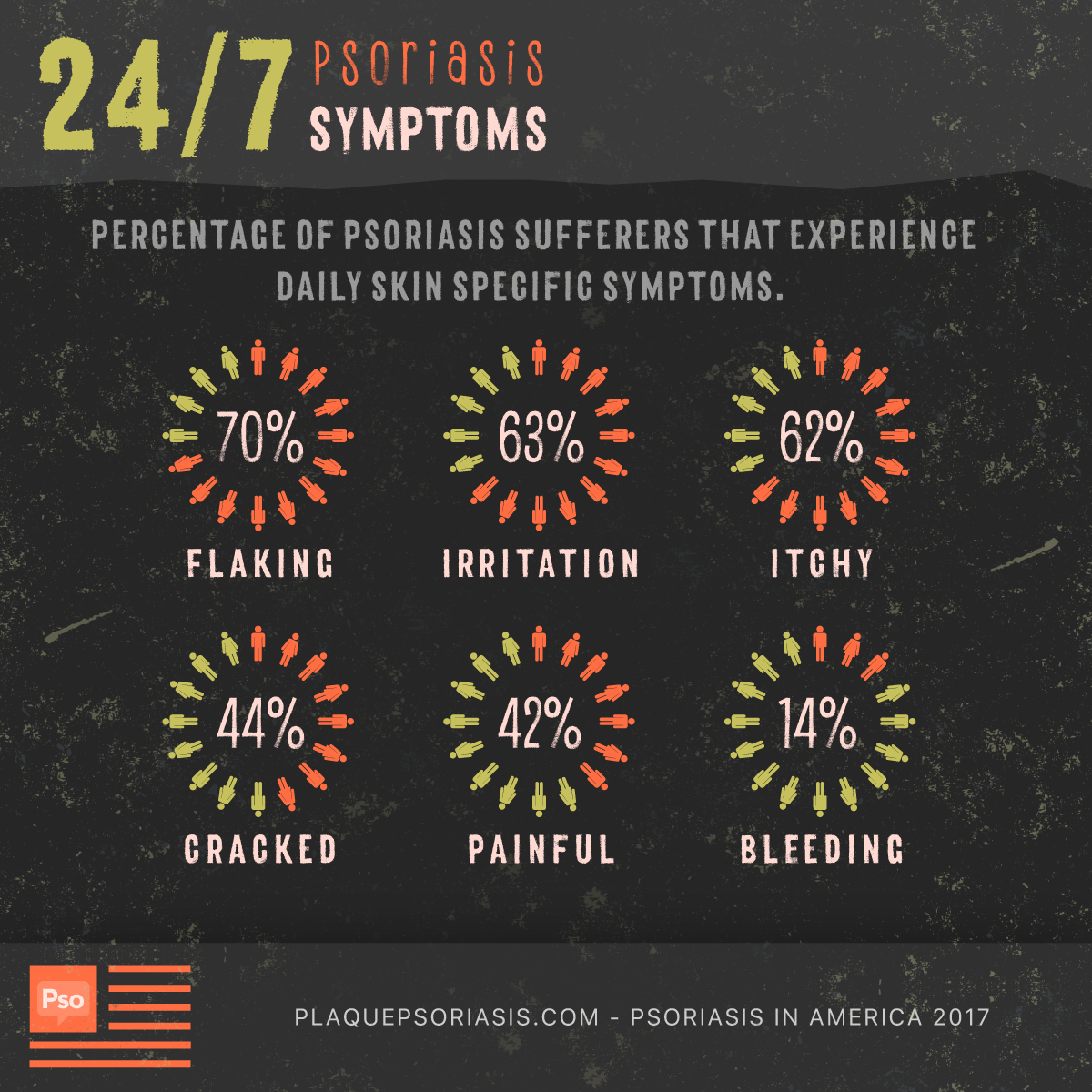 Giving life to the psoriasis experience: psoriasis as an animal

It is no surprise then that when survey participants were asked to describe their psoriasis as an animal that they chose animals that were prickly or scaley (Snake, Alligator, and Porcupine) or powerful and ferocious (Lion, Bear, Tiger). 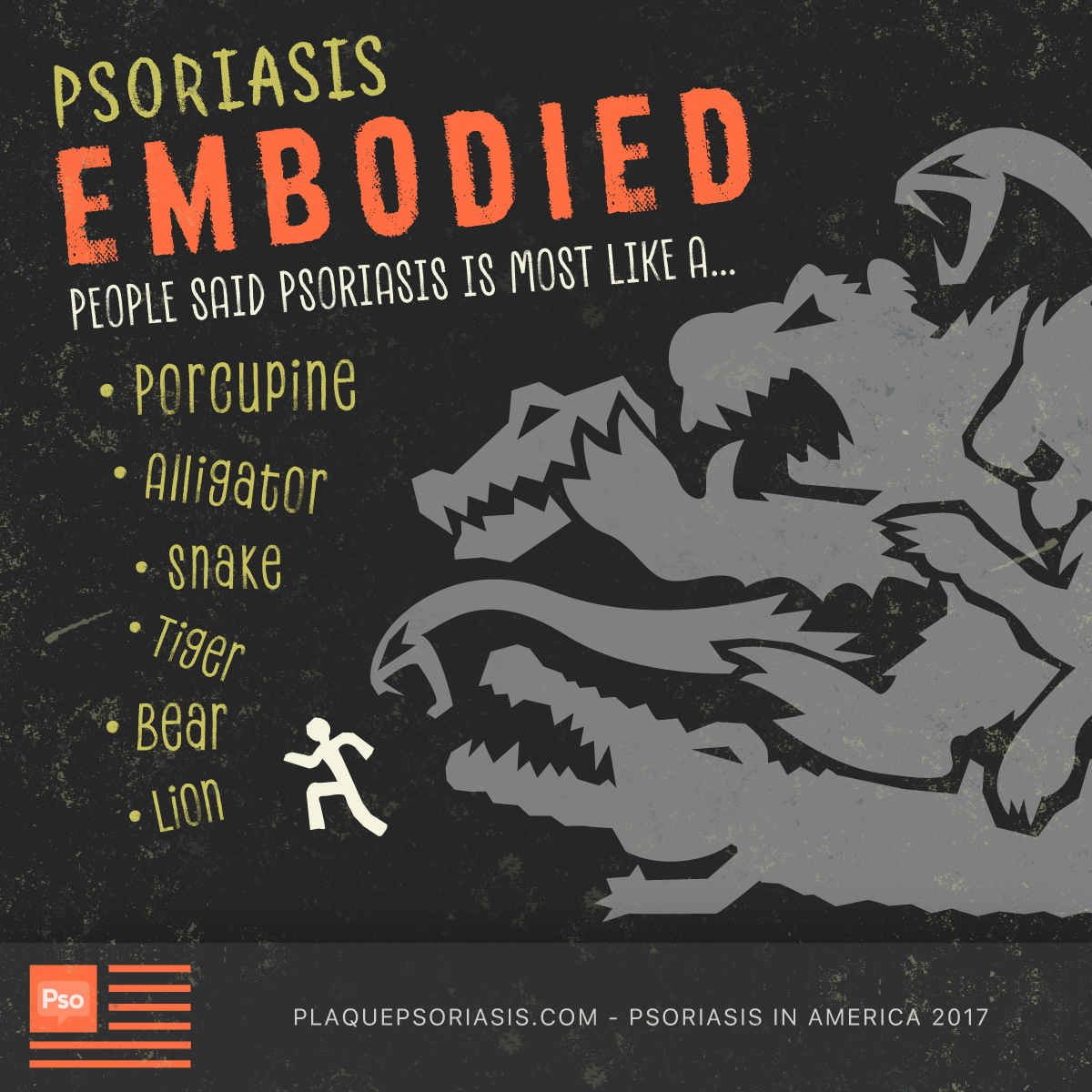 Remission- what would it mean to you?

Psoriasis is an autoimmune disease that causes chronic inflammation of the skin and other body parts and systems, currently, there is no cure. It is, however, possible for people to sometimes go into remission. The goal of many treatment options is to better regulate the body’s immune responses so that people with psoriasis can have longer periods of remission (often described as “clearance”) from their skin symptoms and to reduce the levels of chronic inflammation that may otherwise occur. When we asked survey participants what remission meant to them, many were “unsure” since they said they had never experienced a period of time without skin symptoms...Others shared their expectations. 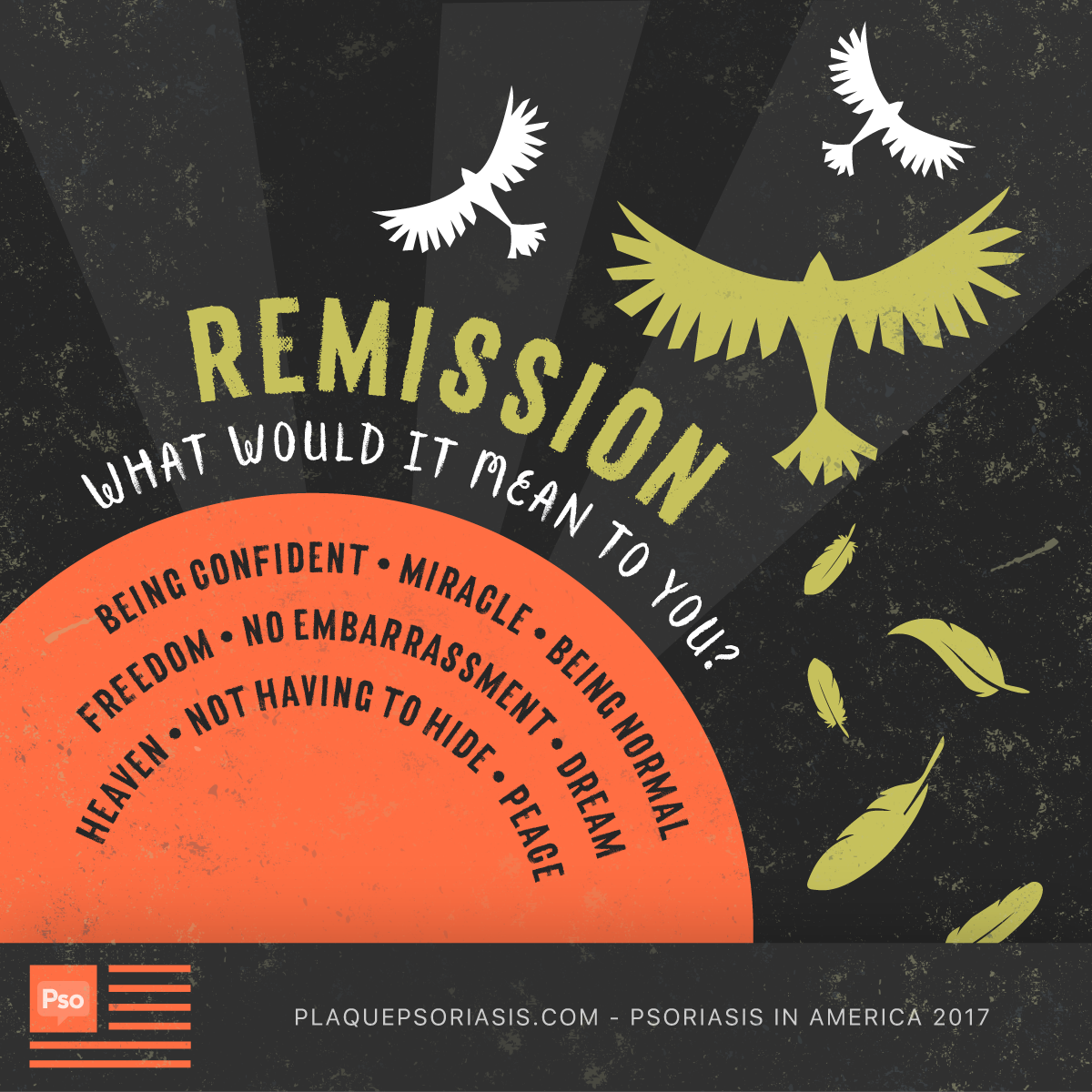 Does your psoriasis skin feel out of control? How are you managing?