Winston Churchill once said, “success is not final, failure is not fatal: it is the courage to continue that counts.” Boy, oh boy, have I found that to be true when it comes to living with psoriasis. Like many others out there, I have failed many treatments, and with each one, I had to make the hard choice to either become more courageous or give up and let the disease win.

In my early days of diagnosis, I was sent home with a big old tub of Triamcinolone to slather myself in. Hopeful, I diligently greased myself up like a pig two times a day. As a reward for my due diligence, I found that my plaques started to respond. I never saw my “real” skin underneath, but the scales started to go away, and the color of the plaques went from a scarlet red (appropriate since they should be ashamed of themselves!) to a blushy pink. I thought to myself: “Wow! This disease is pretty easily treatable. Lucky me!”

My elation lasted about three weeks. Three weeks is all it took for my body to rise up against the magic goop and plan a counter attack. Suddenly the medicine stopped working. No matter how consistently I continued my routine, the plaques kept assembling more and more scales. This was my first experience with a failed treatment, and to say I was devastated would be an understatement. I was smacked in the face with the realization that I was saddled with a ruthless, scheming, manipulative beast; I had the Trojan horse of diseases! It gave me a glimpse of victory, so I trusted it, and then it turned around and struck me harder than before.

I slunk back to my dermatologist’s office with my tail between my legs. I wasn’t ready to give up, but when I was sent home with another slew of slime-filled tubes, I didn’t really have confidence that they would help. I half-heartedly applied them only when I had an important event or interview coming up.

By this point in time, my psoriasis covered 85% of my body. Thick plaques lined my forearms like sleeve tattoos, my lower limbs donned all-natural plaque leg warmers, and the rest of my body was leopard print. My dermatologist then suggested phototherapy. With this treatment, I experienced a new type of failure—I wasn’t able to afford to keep up with the treatments. I felt like a failure to myself. It was 2008 and I had just gotten laid off from the shiny new job I had moved to Portland for. The economy went down the drain, and so did my skin.

I spiraled into an apathetic state that lasted 7 years. I didn’t care about what I ate. I didn’t see a dermatologist. I let my disease spread and flare as it saw put. I spent 7 years in winter clothing to hide my skin, regardless of the weather outside. I viewed myself as a victim and took every chance I could find to feel sorry for myself.

Finally in 2015 I woke up. I realized that my oldest son was at the age that he would remember things, and he was watching me constantly. I wasn’t teaching him to be courageous by allowing the fear of failure to keep me stuck in an unhealthy place. So I picked myself up, educated myself about what other treatments were available, and started on a TNF inhibitor.

I wish I could say that it was all uphill from there, but that wasn’t the case. I had DRAMATIC results when I started the new medication. Two weeks in my plaques were already significantly reduced, and by six weeks I only had hyperpigmentation left. Just like in those early days, I felt I was on cloud nine. I had never seen the skin that lurked underneath the plaques. 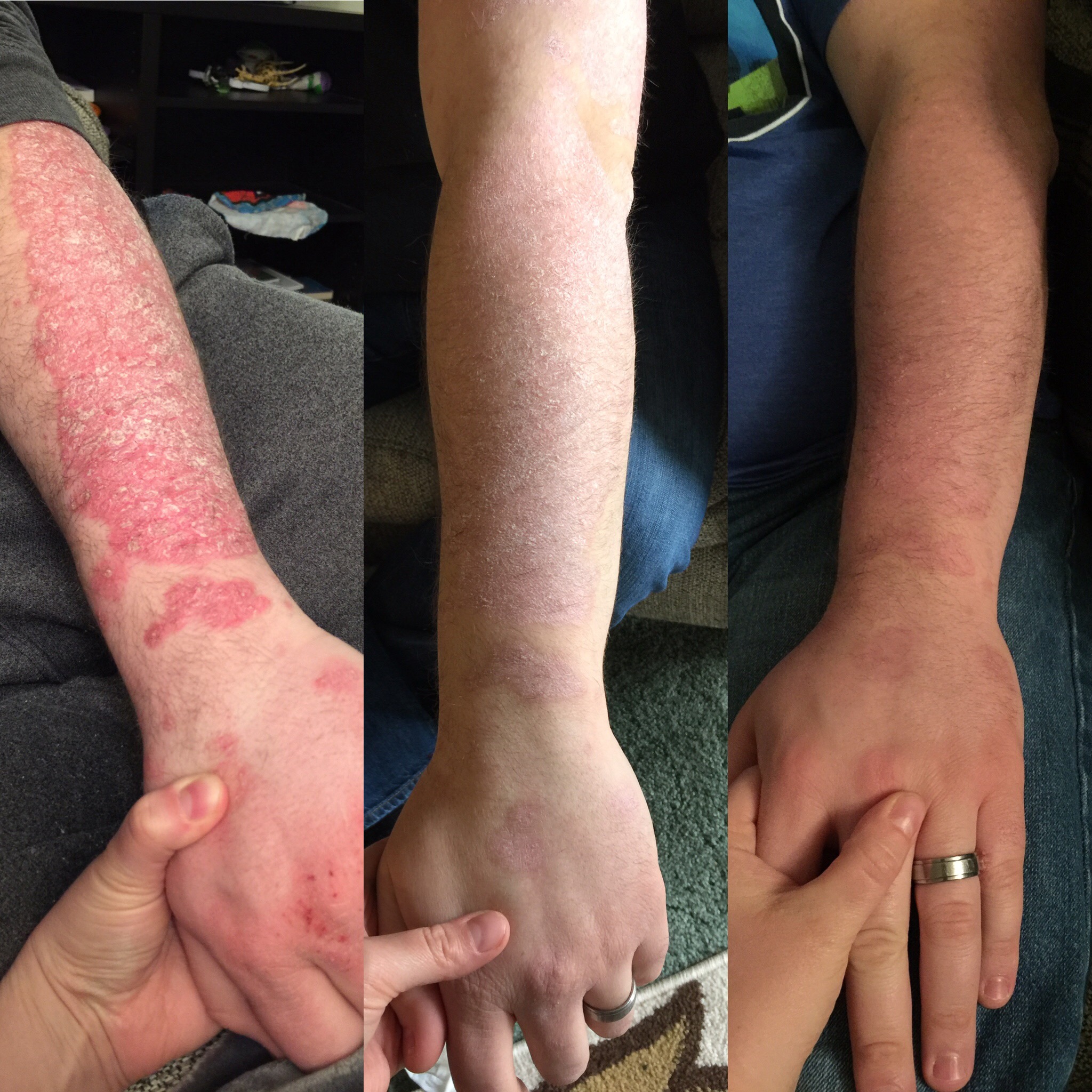 Week 0, 2, and 6 after starting my TNF Inhibitor

Unfortunately, once I hit the three-month mark, the medication began to fail. Crud (as I affectionately called my plaques) on my left leg and upper arm began to return quickly. I felt deja vu! The difference this time, is that I didn’t lose hope. Sure, it was disappointing—it stung—but I didn’t throw myself a pity party. I was prepared. I knew what was next on the list to try, and I geared up for another battle.

If you are facing failure today, please know that you are not alone. Millions of other psoriatic crusaders are battling alongside you. Share your pain and burden. Then, when you are ready, pick yourself up, talk to your specialist about other options, and continue to do whatever you can to help find a cure.

Understanding Psoriasis: What is Formication?

0 comments
This article represents the opinions, thoughts, and experiences of the author; none of this content has been paid for by any advertiser. The PlaquePsoriasis.com team does not recommend or endorse any products or treatments discussed herein. Learn more about how we maintain editorial integrity here.

Please read our rules before commenting.

Do you anxiously anticipate a psoriasis relapse?