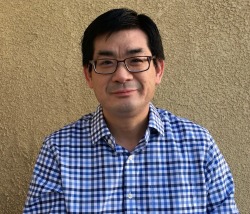 Howard has had severe psoriasis for most of life, since childhood actually. Many of those living with psoriasis can relate to the many treatments tried, and the extent of anxiety, discomfort, and lack of energy chronic illness causes. But it wasn’t until ten years ago that his condition spiraled out of control when he was 95% covered with psoriatic patches—red, scaly, itchy, and bleeding. He couldn’t function and wanted to not only quit my job, but also his life. That was the low point. After about two years of trying treatment after treatment he found one that worked to calm the inflammation storm to a more manageable level. It gave him his life back, even though he still worries about side effects.

That’s when he started writing a psoriasis blog that eventually became The Itch to Beat Psoriasis on Everyday Health as a Patient Expert/Columnist. In 2017, Howard launched his own website, PsoHoward.com, a site dedicated to health, well-being, and wholeness. Howard shares reflections and experiences living with psoriatic/skin disease, encouraging patient empowerment, advocacy, and education. In addition, he has consulted and partnered with pharmaceutical and health companies as a psoriasis patient expert. He also volunteers locally with the National Psoriasis Foundation as the chair of the Northern California Sacramento Committee, guest writer for the NPF blog, and in local advocacy efforts.

Besides psoriasis advocacy he is an ordained minister who has served in a few California churches since the late 1990’s. He holds a Doctor of Ministry degree from Fuller Theological Seminary and lives with his wife, three children, and dog in the greater Sacramento area. Be sure to follow Howard on his Twitter account at @hchang316!

Click here to read all of Howard's articles on plaquepsoriasis.com.

How Picking a Psoriasis Plaque Can Lead to Other Problems