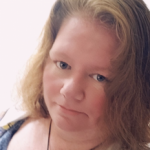 Melissa Withem-Voss started out with PsA suddenly in February 1996. She developed PsO six months later. She has had all forms of Psoriasis including; Plaque, Guttate, Scalp, Palmer Plantar, and Pustular. At one point she was 97% covered in lesions and was Erythrodermic. Read more.

When I stood up, after sitting on the floor watching the Winter Olympics in 1996, I felt pain I had …

By Melissa Withem-Voss
6 months ago Living